Powerflex sponsored Steve Putt and CPracing were recently at Rockingham Motor Speedway in the Classic Touring Car Racing Club Thunder Saloon Championship. Here’s how he got on with his race report from the weekend.

“This weekend just gone was the first event of the season for me. I raced in the Thundersaloon Championship with the Classic Touring Car Club at Rockingham Circuit.

We have been very busy over the winter on the car after having lots of gremlins with the new V8 set up such as high fuel temps, poor water flow and heat soaking rear cylinders. But all our hard work payed off as we had no engine issues what so ever through out the whole event which was a huge bonus due to the hot weather, tough competition and brutal circuit.

Qualifying
We had a nice qualifying start time of 11am which gave us chance to nut and bolt check the car one last time and discuss tactics for the session. 34 cars entered for my race which was the maximum grid size, and great start to the season! However this made qualifying very difficult for the fast cars. I left pit lane in the middle of the pack and had plans to get on the pace early and get through the field into a clear track and put a good time in asap. This was more difficult then anticipated due to everyone backing each other up and having the same plan! Then after a crash by another driver the session was red flagged and we all returned to pit lane. Now I had to do it all again in half the time. It was a real fight in the second half of qualifying, people taking chances up the inside of others, moves you would only normally see on the last lap of a race! After fighting and being held up i was only good enough for 10th on the grid, 5 rows from the front.

Race 1
On the out lap there were lots of games again from the front runners controlling the warm up pace, being a rolling start they are in control once the safety car pulls in. Warming up my brakes and tyres as much a possible knowing i had lots of work to do early on, the pack was bunched up in a chicane almost to a stop, it was then the front runners set off and the front 5 where gone before i even got into 2nd gear!! The rest of us got on it and all kept it flat through the ring and into the first corner, i made alot of ground on the brakes and put pressure on 9th place immediately. Within the first couple laps i made up a couple places but the faster cars were becoming more challenging and time was ticking. 5 laps in i went for a huge move on 6th place, an ex BTCC car, over taking on the outside hugging the concrete wall of Rockingham at 150mph in 6th gear, safe to say i was able to loosen my grip on the steering wheel after the move was complete followed by a huge smile inside my helmet! Now up to 5th and pulling on 4th there was something wrong with my car, my brakes where fading in and out and pedal going to the floor inconsistently. The last remaining laps were scary to say the least, pumping the pedal with my left foot way before my braking zone until the inevitable happend and my brakes failed all together on the last lap forcing me to abort the corner and rejoin elsewhere and loosing 2 places finishing race 1 in 7th position.

Back in the pits and we found the issue with the brakes, the drive shaft had come loose causing the wheel to wobble and open the pistons in the calliper, and easy fix for a change!
Another nut and bolt check and adjustment to anti roll bar and tyre pressures and we are good for race 2 the next day, time for a BBQ!

Race 2
Our grid positions are the finishing order from race 1 so it was 4th row for me this time round.
Preparing myself for more games up front i was staying vigilant but the start was different this time round and we all got away together, so in the first corner i made a dive up the inside of 6th place, putting the pressure on right from the start. He saw me coming and shut the door hard, trading a little paint along the way. I was also under huge pressure from the BMW behind me, the 3 of us battled for the next 7 laps but 6th place infront of me was over driving and making mistakes, it was only a matter of time. Coming up on back markers he took an unnecessary risk and under took him on a narrow part of the track, hoping i would be stuck behind him, but clipped him and they both span off. Now i just had the guy behind me to deal with so i could catch up with the front runners. I turned it on some more, taking a few more risks, cutting grass and shorting my braking zones to a dangerous level. It was paying off and i built a comfortable gap, but then out of nowhere 3rd gear in my gearbox failed, a gear i needed most at Rockingham. That gap was now getting smaller and smaller. Looking out for the last lap board every time i crossed the line i finally saw it with the BMW on my rear bumper. I drove very defensive not giving him any chance to come up the inside but out of the last corner my exit speed in 4th gear was not enough and i was a sitting duck so we crossed the line exchanging places. A great fight from start to finish which is what we all love to do!

So after a good season opener, its back to the garage to find the gearbox fault and get ready for the next race at Cadwell Park on May 13th-14th”.

This years race calendar is as follows: 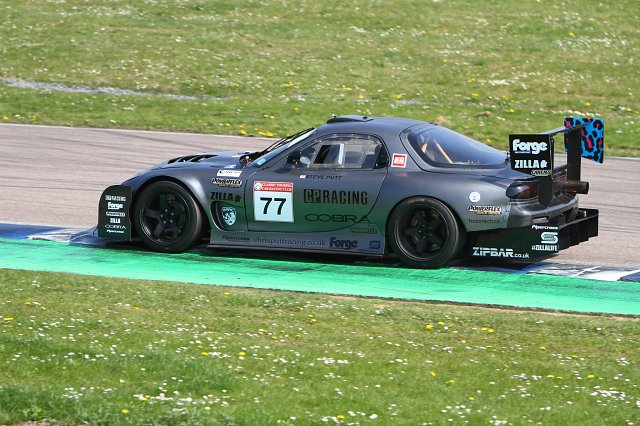 This week sees us add bushes for the hot RenaultSport Clio MK4 RS and its slightly milder siblings.

MINI CHALLENGE GEARS UP FOR TOCA DEBUT WITH JCW

The Powerflex sponsored MINI CHALLENGE UK is back and better than ever, starting this weekend at Donington Park!